ADDISON, TX (March 11, 2019) – EverWest Real Estate Investors, together with Korea-based investment clients, has closed on a $63 million transaction that is part of the refinancing of The Colonnade, a 1,079,190-square-foot, three-building Class A office complex considered one of the premier developments along the Upper Tollway in the Dallas – Fort Worth metroplex. 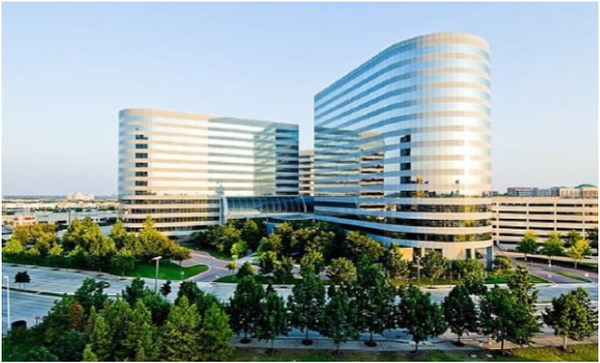 “The Colonnade is a true trophy asset that has been meticulously owned and managed by an experienced institutional team,” said Chong. “The capital improvements and leasing activity that has taken place here has established a strong leasing history, allowing The Colonnade to take full advantage of its premier location and area demographics.”

Built between 1983 and 1998 – with $32.5 million in renovations completed between 2015 and 2017 – The Colonnade totals 1,079,190 square feet with three Class A office towers, a three-story amenity-filled atrium and an eight-story parking garage. The property also includes a variety of dining options, fitness center with locker rooms, retail store and conference center. It is LEED Certified, Energy Star rated and has earned multiple “Building of the Year” awards from the Building Owners and Managers Association (BOMA).

Since being acquired by Fortis in 2013, The Colonnade has remained in high occupancy with anchor tenants Hilton, United Surgical Partners, Zurich American Insurance, HQ Global Workplaces and Systemware.

The Colonnade is located on 13 acres along the Dallas North Tollway, offering quick access to metro Dallas and Fort Worth. It is two blocks east of the Addison Transit Center, which will become a future station along the Cotton Belt Rail Line.

“With these collective advantages in place, it is not surprising that The Colonnade has consistently outperformed its neighboring Class A office complexes,” said McCahill. “We believe that trend will continue, and that the property will continue to hold its position as one of Dallas’ top business centers.”

EverWest launched its structured finance platform in 2013 under the direction of industry veterans McCahill and Chickey, with a focus on originating and managing mezzanine debt, preferred equity financing and B-notes for U.S. commercial properties and developments. EverWest continues to actively seek new investment opportunities in major markets across the U.S.