Employment growth in Toronto and Vancouver: Overflowing into neighbouring regions

Over the past 12 months, employment levels have been growing faster in places like Oshawa Ontario and Abbottsford BC than in Toronto and Vancouver. This is not because these regions are generating jobs at a faster rate than their hub-city neighbours. Indeed, Oshawa has been in headlines for automotive-sector job losses, not gains.

These statistics come from the monthly Labour Force Survey, which tracks employment by where people LIVE (such as Oshawa or Abbotsford) not where they WORK (in Toronto or Vancouver).

Because of this aspect of the data collection process, GWLRA Research believes that at an increasing rate, people with jobs in Toronto and Vancouver are choosing to live outside these metro areas, likely to secure less expensive housing or more home for their money.  As we have documented previously, neither Toronto nor Vancouver has added sufficient housing to account for recent population growth, itself driven by employment opportunities. 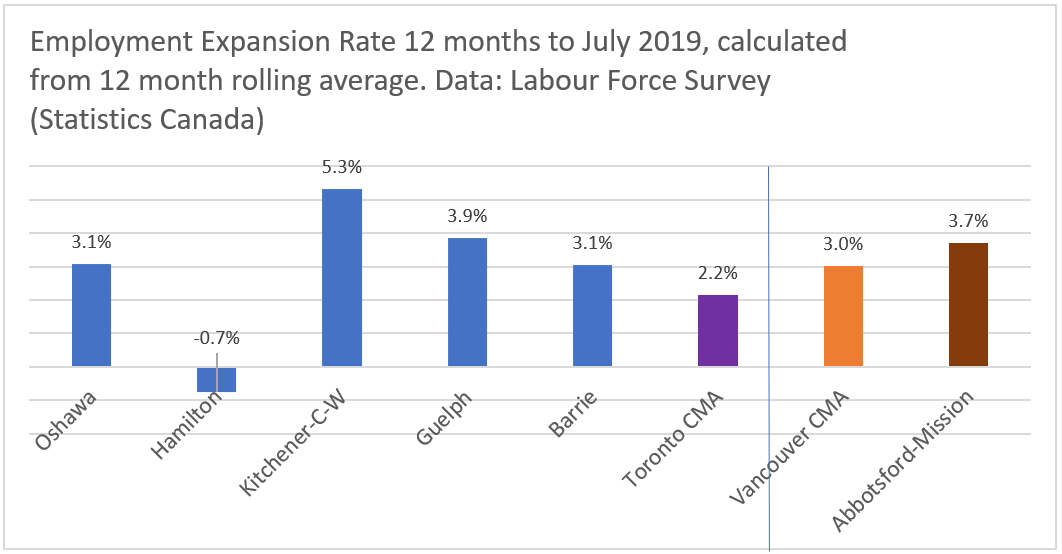 As an example, the Home Price Index benchmark two storey home price in Greater Toronto is $929,600 and even over $1 Million in Oakville (separate real estate jurisdiction but part of the Toronto CMA), whereas in Hamilton a benchmark two storey house is $684,000 and in Barrie it is $493,000.  In the Vancouver region, separate statistics do not exist for Abbotsford-Mission, however the average listing price for a detached home there in August 2019 was $586,000 in contrast to the Greater Vancouver benchmark at $1.6 Million.*

Go-Train service links these outlying CMAs to the Toronto core while the West Coast Express connects distant Mission and points in between with Vancouver. Both commuter rail services—along with expanded freeway capacity--have enabled this choice.

Although the process may have accelerated over the past 12-24 months, there has been a long-standing gradual trend of people commuting from these outlying areas for years.  Consider the commute patterns from the 2016 census.

At the 2016 census, 43% of workers in Oshawa already commuted into the Toronto CMA and 32% of those in Abbotsford-Mission worked in the Vancouver CMA.

Despite as much as a two-hour travel time whether by car or train (depending upon where in the Toronto CMA a person works) there is a growing base of commuters from Kitchener-Waterloo going to Toronto.

GWLRA tracks employment in municipalities surrounding the larger metros in order to measure overall economic activity and by extension real estate demand in the core metros and also in these satellite areas.

The evidence above illustrates that housing needs exceed supply in Toronto and Vancouver metros and GWLRA is actively building new rental housing in both, with over 4,000 units in the development pipeline in Toronto.  Moreover, we continue to seek development sites, especially in the Vancouver area.

Young families migrating to outlying areas is driving rapid population growth in these markets—along with retail demand as this is a prime spending demographic. GWLRA continues to seek grocery-anchored shopping centres in these fast expanding nodes and recently purchased Sumas Mountain Village in Abbotsford as part of this strategy.

Looking ahead, demand for eCommerce deliveries in these areas will grow. Although the main hubs in the Toronto and Vancouver will also serve these areas, the future needs for “last mile” staging could result in small and mid bay logistics space demand. Moreover, a lack of industrial space in both Toronto and Vancouver could see businesses shifting to these outlying regions as well.  GWLRA continues to monitor these trends and adapt acquisition strategy accordingly.