History Repeats: How Past Experience Informs the Post-COVID Office Future

A familiar situation has occurred four times over the past 30 years:

Office buildings are experiencing rising vacancy rates. The economy is uncertain. And new technologies have made it easier to work from home. Investors as well as business media pundits speculate as to whether the era of the office building is over.

Everytime, after a period of volatility, the economy and office market recovered and strengthened. New office jobs emerged that compensated for, and even exceeded, those positions that disappeared or shifted to home-based or remote locations.

Will this time be different? Our best estimate right now is “unlikely.”

This Research Note compares the office market in past downturns to the challenges faced today. From within each economic downturn, a process of “creative destruction” has occurred that generated more office jobs albeit after a time of uncertainty. Moreover, the past shows how technology has yet to offer an adequate substitute for human interaction; people want to collaborate in person. The table below summarizes our findings and the narrative below provides more details. 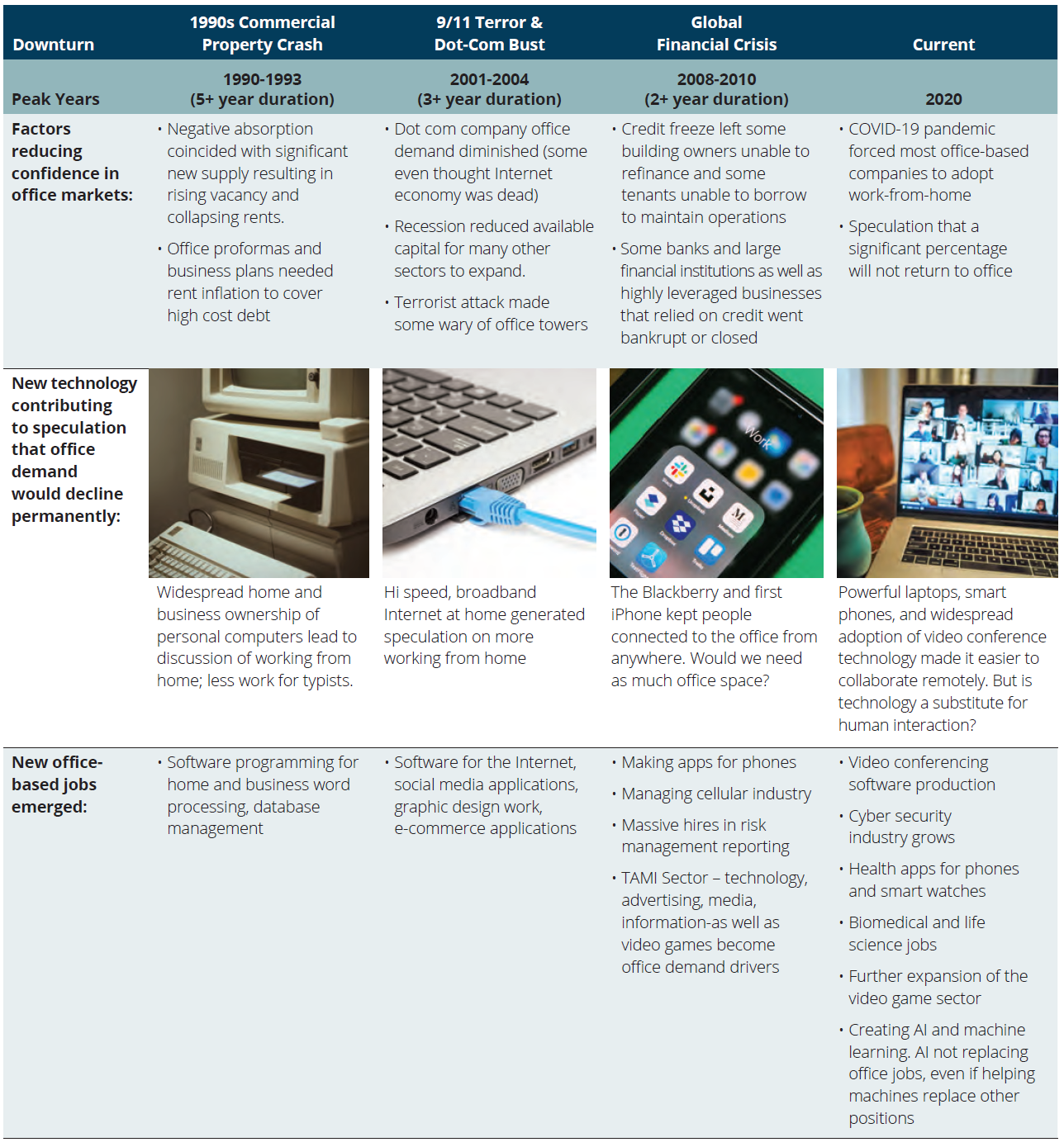 The Economy And Office Market In The Early 1990s:

An economic crisis and slow down occurred caused by an oil price shock, wars in the middle east, higher interest rates, and the aftermath of a financial savings-and-loan scandal. It coincided with overbuilding office space that began in the 1980s. The result was high vacancy rates and even empty buildings. The office market looked bleak. Many private developers and owners were in financial distress and eventually went into foreclosure or were acquired. (During this period pension funds and others with capital strategically acquired office assets at relatively low cost). Because of new technologies and a sluggish economy, many thought office demand would not return for years, or ever.

IBM PCs and the Apple MacIntosh made it possible to write reports and work on electronic spreadsheets (which were relatively new) at home and bring files back and forth to work on a 5 ¼ “ floppy disk. This transformed both home life and business structures. The PC also reduced the need for an army of typists in many offices as “bosses” could type or at least edit their own documents and there was no longer a need to re-type every time there was a change. Many asked, if we didn’t need as many “secretaries” and if people could have the same computing power at home as the office, would we need this much office space?

Why the office triumphed:

When the economy recovered so did the office market. New jobs emerged creating software for these PCs that were now in many homes as well as on every business desk (the Microsoft era was born, for example). Fewer typists were needed (low value-add jobs) but other roles emerged—often higher value-add-such as using spreadsheets to track performance in more detail, using word processors and graphics programs to create more marketing materials or reports in house. Being able to produce documents with greater ease meant that investors and stakeholders came to expect these regular reports, creating more office work.

The Economy And Office Market In 2001:

In 2001 the new internet-based business sector, “the dot coms” had their boom go bust. Companies with the suffix “.com” raised money on the public markets in advance of having a proven product--and leased office space with those funds in anticipation of growth. More seasoned companies also raised capital to fund growth and secured office space with it. When the speculative frenzy ended in a stock market crash over the winter of 2000-2001, many companies shut down and the office space under construction or newly completed no longer had tenants. Office availability soared. Later in 2001 terrorists brought down New York’s most iconic office towers. Many inside and outside the real estate industry speculated that individuals and companies would not return to offices, or certainly not high rise trophy towers that could be potential targets.

Meanwhile, the telecom world had introduced broadband, high-speed internet to home users. Instead of accessing the internet by dialing in on a phone line connection (from a landline), people could connect their home computer directly to the internet via a cable. Again, everyone speculated that now people truly could work from home, sending and accessing files, and communicating by email and chat software. And indeed, more people did start working remotely whether full time or occasionally in jobs formerly done from an office.

Why the office triumphed:

Office buildings again filled. They also evolved to meet the needs of an increasingly well-educated and innovative “creative class” of knowledge workers—people who either created software or used it in increasingly innovative ways such as in sophisticated media arts or advanced Excel modelling of investment parameters. Open floor plans in office space allowed for more instant communication while team meeting rooms and “chill spaces” gave workers alternative places in which to work individually or collaboratively. Although the myth of the solitary programmer persisted, software production requires tremendous team-work and group problem solving. Working from home necessarily as productive.

The global financial crisis froze credit throughout the financial system. Some building owners needing refinancing could not obtain it resulting in distressed asset sales and falling values. Select investment banks and financial institutions went bankrupt, closed or were sold to bigger entities, reducing office demand. The broader “Great Recession” caused further contraction of office-based businesses. The world wondered if office space built with cheap financing in the previous years to the 2008 crash would fill.

Revolutionary Technology – The Blackberry & Smart Phones.
The Blackberry smartphone was the trendy new technology at the time, with the iPhone starting to catch up. Initially people loved not being tied to the office as they could keep up with emails from anywhere. This led to renewed concerns as to the future of the office as it seemed technology allowed people to stay in touch anywhere. Ironically enough, those devices may have actually created a stronger pull to the office. The device told people what they were missing by not being at their normal workplace. A fear of missing out (FOMO) emerged.

In the aftermath of the 2008-09 crisis, new regulations arrived to prevent financial institution excesses. Monitoring risks and reporting financial activities generated new office jobs. Soon multiple floors in large buildings were filled with risk analysts, for example. The smart phone also created demand for new products to use with it, such as apps, search engines and directories, as well as information management webpages, interactive maps, eCommerce sites, and much more. Smartphones required people, in offices, to create and manage the content. Amazon and Google—to name two companies--have never looked back from this era. Neither has the office market.

The Economy And Office Market Today:

In 2020, a pandemic forced most office workers to shift to working from home literally overnight. Ever since, there has been speculation that many might never return to the office, with implications for office buildings.

Powerful lap tops with video conferencing technology. Office workers at their personal kitchen tables or on desks in bedrooms kept the office-based economy going. Zoom and Teams allowed people to connect visually, virtually. There was a novelty effect at first—the technology was “kinda cool” and Zoom happy hours and parties became popular and then waned. And some workers (especially those without children at home) found they could be as productive on many tasks as in the office—at least initially. Over time, many leaders as well as individuals have noted that it is harder to be innovative, inspired, or truly do collaborative problem solving over video conference. Meanwhile some single people found working at home isolating and parents of younger children often struggled to find focus time.

Why the office will triumph:
Early evidence suggests the office will triumph again for the same reasons it has repeatedly done so over the past 30 years. Humans are social creatures. We naturally build relationships and work together. However, collaborating via a technology conduit is different than problem solving in person.

Many business leaders are starting to report a depletion in social capital. Those ties that help people work together are weakening and don’t seem to get replenished over video conferencing. Although not often measured as productivity, key to the success of many organizations are the spontaneous chats as well as formal meetings at the office that create bonds—shared experiences--which then make it easier for people to solve problems or work on projects together. Attracting and retaining talent as well as onboarding has also become more challenging without a shared office experience from which to build company culture. Although post COVID-19 most office workers will likely have an option to work remotely, at least part time, evidence from previous cycles suggests that the majority will choose to be in the office much of the time.

There are also new jobs emerging from this era. For example, growth in eCommerce as well as online entertainment and information consumption has created computer engineering and software programing jobs, as well as positions marketing their products, all typically based in an office building. The health care sector is also growing, which will generate specialty office demand.

What is different this time?
This economic downturn did not happen because an office-using sector such as finance or technology fell into sudden and rapid decline. Therefore, there has not been an automatic wave of negative absorption as occurred in the past with collapsing dot com companies or bankrupt banks. Indeed office-based sectors have held up well and many technology companies have been on hiring sprees.

Second, there is a shortage of talent for many office-using companies. For employers, this means prioritizing attracting and retaining talent and making them as productive as possible. For most, this will happen in an office with a desk as well as collaborative spaces, and amenities for taking breaks—it will so mean empowering workers to work from home or remotely when they need to do so, or when it’s the most productive option. People costs are typically 75-85% of company expenses, with real estate and technology falling into the remainder. Real estate strategy for many companies is now designed to meet human resources needs (rather than forcing people to match a real estate cost agenda). Pre-COVID, a growing trend was to allow employees to work from anywhere, but to make the office so productive and valuable—as well as inspiring and fun—that most will choose the office. The COVID-era may well accelerate this approach. GWLRA has been upgrading buildings to help office tenants better meet these evolving employee needs.