With fast fashion, luxury and department stores dominating retail headlines of late, we thought it was timely to explore an often overlooked but critical part of the sector: grocery. This Research Note in particular focuses on the industry’s largest brands and companies in Canada.

Grocery represents a sizable portion of the retail market in Canada, comprising 17% of total sales last year according to Statistics Canada. On a per capita basis, Canadian consumers spend a majority of their retail spending on groceries – $2,462 on average[1] – well ahead of other sectors including general merchandise (second largest) at $1,779.

Unique in Canada is that grocery is dominated by a handful of retailers. Data from Canadian Grocer show that five companies — Loblaws, Empire, Metro, Costco and Walmart — make up 80% of the total grocery sales in the country (Figure 1). 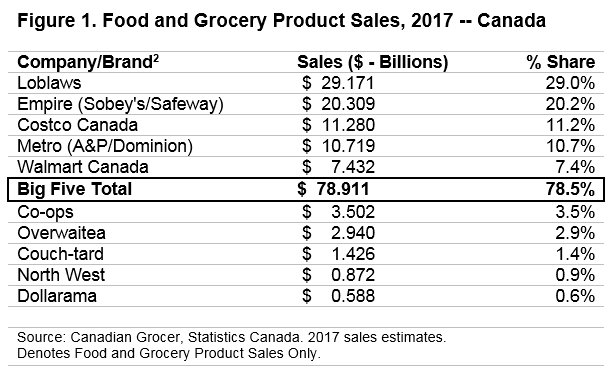 Research shows there has been notable changes among the “Big Five” grocers. Costco and Walmart now make up 19% of the market, up significantly in recent years (Figure 2). Costco’s market share in particular has more than doubled since the early 2000s, in contrast to Empire and Metro whom have seen declines, and Loblaws whose share has stayed relatively unchanged.

From a real estate perspective, these shifts have had noticeable impacts. Using data from company filings (Figure 3 and 4), GWLRA analysis found that Walmart surpassed Loblaws from a retail space perspective in 2016 and is now the largest among the Big Five with 53 million square feet in occupancy. Empire has also grown significantly in recent years, but due mainly to their acquisition of Safeway in 2013. Since the acquisition, Empire now totals 39.2 million square feet. Costco, the smallest of the group in terms of retail square footage, added 3 million square feet since 2009 representing a growth rate of nearly 30%. Note that these figures are for the retailers’ total occupancy and differ from the food and grocery sales in Figures 1 and 2 above (Walmart and Costco for instance sell a high volume of general merchandise in addition to food products). 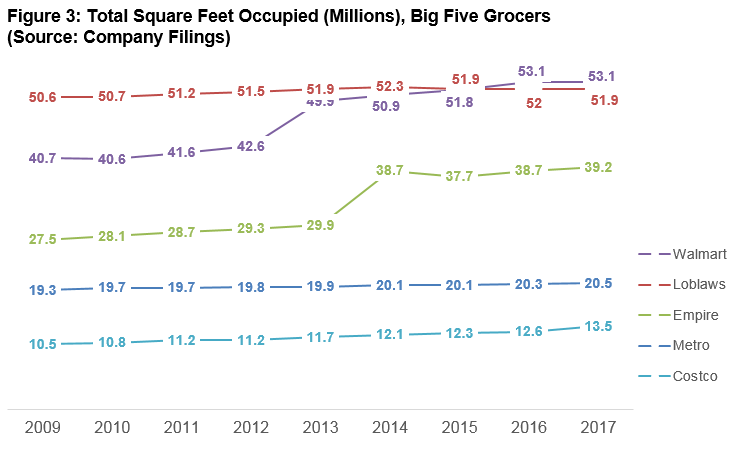 Overall, the data highlights an important shift in where grocery sales are occurring – general merchandisers and discounters (which include groups such as Costco and Walmart) appear to be a gaining ground on traditional grocery/supermarket formats. Studies[3] suggest that market demand for these types of retailers continues to grow, with discounters attracting a wider range of (high and low) income segments and demographic profiles. From a real estate perspective, the data also highlights divergence among Canada’s major retailers – Walmart’s already sizable market presence continues to build, with Canada’s traditional grocery retailers seeing a more moderate pace of growth.

(Special thanks to Sara Obidi, a Masters of Urban Studies Candidate at Simon Fraser University and Colliers International Consulting for their research contributions).