Real Estate Demand Drivers Were Strong in 2017. What is the Outlook for 2018?
Research

Real Estate Demand Drivers Were Strong in 2017. What is the Outlook for 2018?

2017 marked a strong year for Canadian real estate. Most markets saw positive absorption across the asset classes, declining vacancy rates, and (in some cases) even rising rental rates—including in Calgary and Edmonton, outside of the struggling office markets. Cap rates also generally continued to compress or hold firm at their low levels.

A foundation of this strength was solid—and in some cases strong—employment growth, especially in the economic drivers of Canada’s major cities. 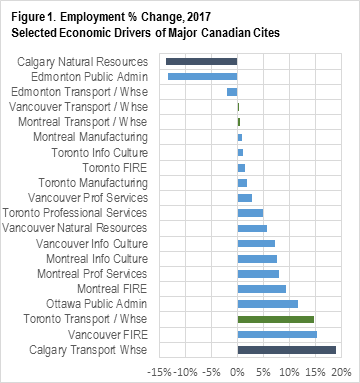 GWLRA estimates the size and strength of key economic sectors within a city using location quotients (a measure of the concentration of jobs in a sector in a region compared to the national average), as well as additional economic analysis. As Figure 1 illustrates, aside from the three major drivers in Alberta (largely linked to energy), all others sectors GWLRA considers as regionally significant economic drivers saw positive growth in 2017. Notably for Edmonton, the second half of 2017 brought growth in natural resources (not public administration), which helped stabilize the industrial real estate sector.

Looking ahead to 2018, initial indicators suggest economic and job growth may moderate.

The transportation and warehouse-distribution sector saw job vacancies rise in 2017, especially in BC where it likely was the limiting factor in job growth rather than demand. The shortage of truck drivers may be structural (fewer young people want these jobs, especially long-haul trucking), which could result in changed logistics strategies with resulting industrial real estate implications.

Although the data is only available at the provincial level, we can infer that Toronto and Montreal may struggle to grow their thriving tech sectors. Job vacancy in the” data hosting and processing” sector is already well above the national average, which has implications for office demand growth. In the short run, tenants unable to hire will not need to grow their real estate footprints. However, assuming they find their workers, there could be a boost in demand for expansion space in the future.

Retail real estate demand may also wane in the near term—from restaurants. Shopping centre landlords have been growing the food offerings as part of a shift toward making retail spaces into community gathering places. However, with food and accommodation sector struggling to find enough workers in BC, Alberta, Nova Scotia and Ontario, restaurants may be reluctant to expand or may wish to reduce operating hours. This could impair the ability of both office and retail landlords to add restaurant amenities to their properties.

We do note that in sectors with strong growth trends and adequate labour availability will likely see continued growth. These include professional services in most cities as well as the finance sector—solid indicators for office demand.

GWLRA Research will be monitoring these trends as 2018 unfolds, recommending strategy and expectations adjustments accordingly.