Tale of Two Economies: What the Latest Job Numbers Suggest about Recovery in Calgary and Edmonton
Research

Tale of Two Economies: What the Latest Job Numbers Suggest about Recovery in Calgary and Edmonton

The Canadian Labour Force Survey (LFS) release on May 5th contained encouraging news for most cities, especially Calgary and Edmonton.

Both cities continue to see job growth—a sign that the worst of the recession has passed.  Edmonton has had four consecutive months of growth totally 15,000 new jobs according to the seasonally adjusted numbers in the LFS while Calgary has experienced ten months of increases generating 25,000 positions. 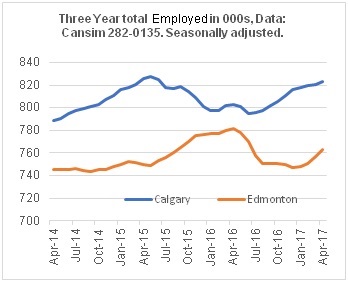 Looking at the components of this growth, Calgary appears to be undergoing structural change while Edmonton is experiencing a cyclical recovery.

In Calgary, the largest growth sectors in recent months* have been “Transportation and Warehousing” as well as “Other Services.” The losses meanwhile have been concentrated in “Natural Resources” and “Construction.” As the retail distribution hub for western Canada, Calgary’s transportation sector continues to expand. Several factors are contributing: the strength of population growth in the west; the strong economy in BC—with accompanying robust retail sales.; and the transformation of the retail sector to include more “just in time” deliveries to stores as well as expanded eCommerce, which require expanded distribution capabilities.

Strong growth in “Other Services” suggests Calgarians may be experimenting with new types of businesses and jobs.  This category includes all variety of services ranging from equipment repair and maintenance to pet care, salon services and even advocacy and charity work. Although different from energy jobs, every city needs this sector to support the broader needs of a population and Calgary has previously struggled to supply enough of such services.

Worth noting, Calgary has not seen much job growth in North America’s fastest growing sector of “information, culture, recreation” which includes technology jobs, which we still believe has significant potential.

Edmonton meanwhile has seen continued strength in Public Administration and Education, which is typical in downturns. When the economy shifts, government employment is based on longer budget horizons that rarely change in the short-run; meanwhile layoffs and reduced hours in other sectors convince many to seek additional post-secondary education or training to upgrade their skills. The manufacturing sector, which is closely tied to the oil and gas extraction industry, continues to downsize, consistent with an energy-based recession. Possibly related to the rebuilding of Fort McMurray, Edmonton has also seen a growth in wholesale and retail trade.

Although it is too early to know definitively whether Calgary is undergoing structural change and Edmonton a cyclical recession, this is something that GWLRA continues to monitor.

*Sector level data is not released in seasonally-adjusted format. For this analysis GWLRA used a 12 month rolling average to smooth out seasonal variations. The most recent hiring boost in 2017 will not be fully reflected in these sector numbers