Calgary’s economic diversity declined during the commodity super cycle of 2004-2014. In 2001 the region counted on the energy sector as well as distribution and information-culture (which includes many “tech jobs”) as drivers of the economy and employment. By 2014, information and culture had disappeared as an economic driver (using a measurement known as location quotients). That is the proportionate share of employment in this sector had fallen to well below the national average after being well above the national average in 2001.

One barrier toward diversifying the Alberta economy today is the higher average wages enjoyed by Albertans across many sectors.  A global or national company wanting to open a new office may be dissuaded from selecting Calgary (or Edmonton) because of the wage differential compared to other Canadian choices. There is one exception, however. Technology.

The “Information, Culture, Recreation” category includes telecommunications companies as well as software developers and new media employment.  And in this sector, Alberta offers lower wages than BC, Ontario and Quebec.  Indeed, the battle for tech talent in Toronto and Vancouver can be fierce.

GWLRA is now watching to see if larger companies open or relocate some tech jobs to Calgary or Edmonton (where there is plenty of available office space as well as educated workers).  And, given the confident, entrepreneurial culture in the province, maybe we will see some successful home-grown start-ups as well. 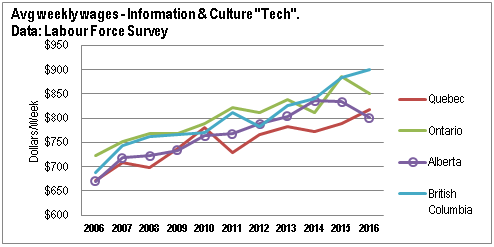