Which US Cities Offer the Most Labour Resilience?
Research

Which US Cities Offer the Most Labour Resilience?

With employment growth underpinning demand for commercial property, we thought it was timely to explore the concept of labour resiliency among major United States (US) cities. Labour resiliency can shed light on which markets tend to perform well during periods of both growth and volatility—a key consideration in portfolio construction and investment strategy.

Using job data from the US Bureau of Labour Statistics (BLS), GWL Realty Advisors examined which major American metro regions saw the most—or least—employment losses during the last two major recessions: the Dot-Com Bust (2000-2003) and the Global Financial Crisis (2008-2010). Employment trends were also examined using a larger seventeen year time frame, 2000 to 2017, to explore the cumulative impacts of these recessions.

Our focus was on US metro regions above 1 million in population, which totaled 53 unique geographies. (Note the regional exclusions in the footnote below[1]). To gauge the relative magnitude of job loss, we compared the annual non-farm ‘peak to trough’ employment before and after the economic shock occurred.

The Dot-Com Bust (2000-2003): Losses concentrated in Manufacturing, Professional and Business Services and Technology

Looking at the Dot-Com recession (Fig. 1), San Jose, San Francisco and Boston saw the most cumulative job losses (based on percentage change) across all US cities. This was unsurprising given their significant exposure to technology industries. Overall, the top 10 markets lost a combined 917,000 jobs between 2000 and 2003.

When looking at specific industry sectors which made up these losses, it was actually manufacturing and professional and businesses services—not Technology[2]—that had the most broad-based declines. Manufacturing has been declining in the US the last several decades, suggesting that the Dot-Com bust merely magnified losses in an already shrinking sector. Professional and Business Services, which comprises accounting, legal, engineering and other related sectors, tends to see losses during economic slowdowns given its reliance on other industries for growth. In the case of the Dot-Com bust, many workers part of the technology industry would have fallen within this category as contractors and other ancillary positions. Among the least resilient markets during the dot-com bust, Denver was the only market where the Technology sector led the most overall job losses.

Several markets saw minimal or no losses during the 2000-2003 period (Fig 2.). Low technology exposure was a common theme across these cities, highlighting the important link between the structure of a city’s economy and the nature of the recession in determining labour resiliency.

For the Global Financial Crisis (Fig. 3), a different set of cities saw the most cumulative job losses with Las Vegas, Phoenix and Riverside leading the way. Among markets with significant losses, Cleveland was the only market to be in the bottom ten for both Dot-Com and Financial Crisis periods. Given the fallout of the US housing market during the Financial Crisis, construction job losses were significant, as were industries tied to consumer spending such as retail trade and leisure and hospitality.

Looking at Figure 4, the most resilient cities during the Financial Crisis include Rochester, Buffalo, Austin and San Antonio. Notably, these markets had among the smallest concentration of construction employment across US cities. Richmond, VA, and San Antonio, TX, also made the top ten list of most resilient cities during the Dot-Com bust. The two cities have large life sciences, healthcare and government sectors which helped insulate them from recent recessions.

The concept of labour resiliency is not only about markets with the least job loss during periods of volatility; it is also about the ability for a market to sustain long-term employment growth as well. From our perspective, resilient cities are those which offer a combination of both strong job growth and minimal job loss. From an investment perspective, stability is only as good as the relative growth it offers.

Accordingly, Fig. 5 shows the top 25 US markets with the highest long term total job growth relative to total job loss. What we wanted to do was highlight which markets were able to see growth relative to losses sustained mainly during the Dot-Com and Financial Crisis periods. A higher ratio notes more long term job creation relative to job loss—a key factor for labour resiliency.

Looking at the list, it would appear Washington, DC, San Antonio, Austin, Houston and Raleigh are the top markets. Save for Houston (which has unique labour dynamics given its large Oil and Gas exposure), the other cities appeared as top markets with the least job loss during either the Dot-Com Bust or Financial Crisis periods. 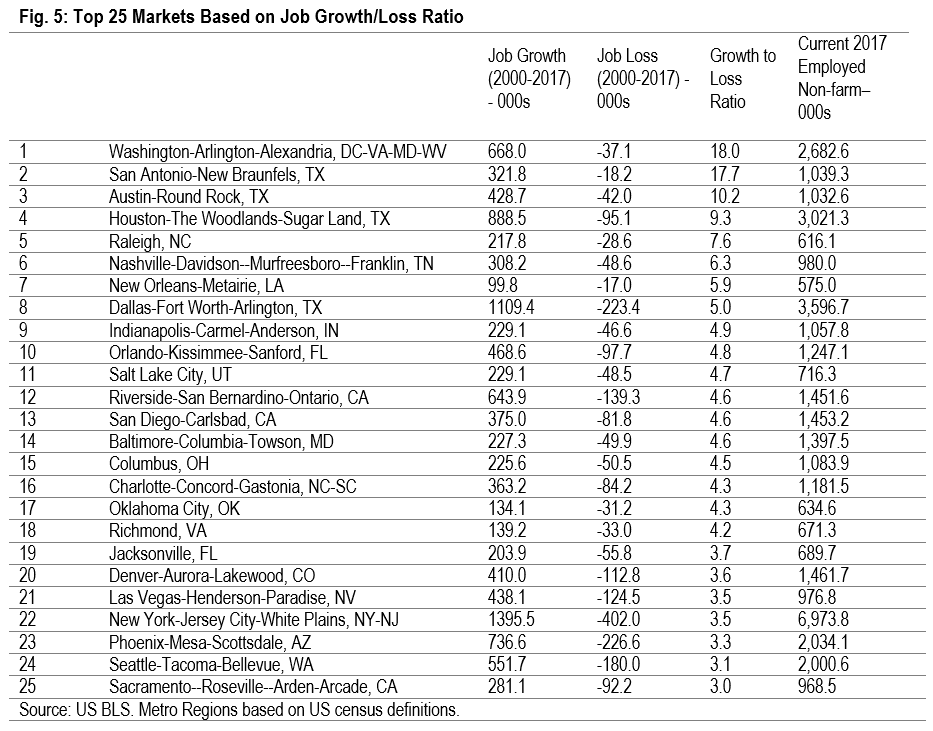 For real estate investors, labour resilience is an important consideration for long term performance. However, it is not the only consideration. Performance is driven by many other factors unique to a market; capital liquidity, property fundamentals and urban structure play equally important roles.

Furthermore, as mentioned and shown in the analysis, labour resiliency is largely the result of the nature of the economic shock and the structure of the economy at the time. Markets that have shown stability or significant volatility over one market cycle may not behave the same the next. Accordingly, navigating these various economic and market themes, both cyclical and structural, remain paramount for long term investment performance.

(Special thanks to Sara Obidi, a Masters of Urban Studies Candidate at Simon Fraser University for her research contributions).

A majority of technology jobs are categorized within the ‘Information’ NAICS sector.